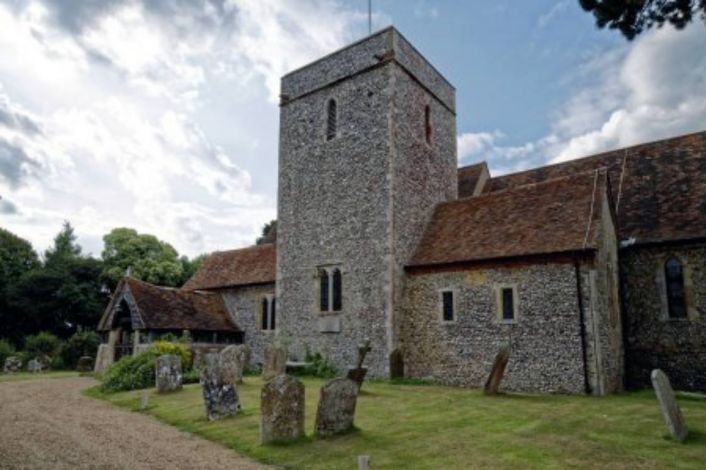 According to the Domesday Book (1086 - 87), there was already a Saxon church here at Upper Hardres at the time of the Norman Conquest. It was rebuilt in the twelfth century, and was consecrated in 1160. Not all the original church remains. But the tower does, with two typically Norman pillars supporting the arch between the chancel and the Lady Chapel. The Norman FontThe massive font, on your right as you enter, is also Norman, though it was not originally in the position it is now.

Built of flint, the nave of unknapped flints. Chancel and nave with no division between them, south chapel and south aisle with the tower between them and south porch. C13 to C15. Norman tower. Some of the windows contain glass Circa 1200 and C14 stained glass some of which was brought here from Stelling Church in the C18. Shallow C18 west gallery. Crown post roof to nave. Norman font. C17 and C18 wall monuments. The churchyard contains some C18 skull motif headstones and one headstone with heart, cherubs bones and hourglass motif.